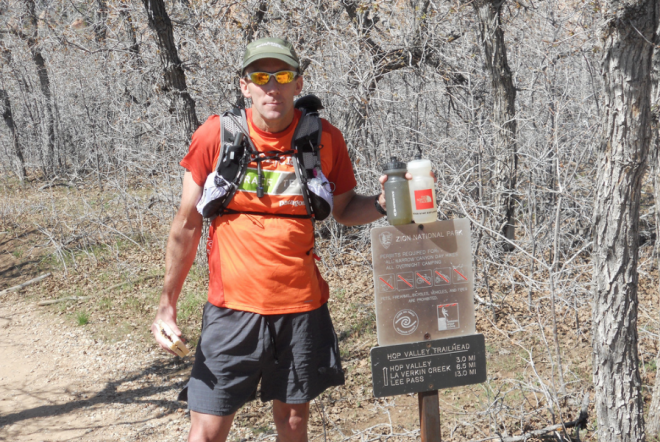 The following is a report written by Rock/Creek racer Sheridan Ames.

There are milestones in life that you feel and are often obligated to celebrate. Turning 50 this year provided a good excuse to do something reckless and dangerous, traits in which I am well versed and practiced. To many, the following account will accurately bear this out.

A number of years ago I did a one-day solo run of The Grand Canyon. The out-and-back run is called the Rim to Rim to Rim (R2R2R) trail run of approximately 50 miles (depending on your exact routing) and is a staple of many accomplished trail runners. For a number of reasons it turned out to be an experience of a lifetime (nearly cut short on this run) and after completing it, I thought I would never want to attempt a similar solo run again. Until, of course, I turned 50 and wanted to deliberately tempt fate again.

A quick search on the internet immediately provided an equally daunting 50 mile challenge in a location I had as yet not been, but was on my short list of places to visit: Zion National Park, Utah. As it turns out, you can follow the trail system diagonally from one corner of the park to the opposite corner of the park. This route is known as the Zion Traverse. Perfect, or so I thought.

The more I read about the run, the more challenging it sounded and the more I planned it out. Unlike The Grand Canyon, most of Zion is extremely remote and sees very little traffic beyond the short main road into the center of the park and access to the wildly popular “Narrows” trail/river system. Several of the trails I would be running on were listed as “faint” in all the literature posted.

Another major hurdle was potable water. There were natural springs shown on the map but no guarantee that they would be flowing, and even if they were, the water had to be treated. I needed to be prepared to run for hours carrying all the water I might possibly need. For those who are geographically challenged, you should know that Zion is basically a desert with small pockets of water that occasionally perk up from the ground or the occasional swift-flowing sediment-laden rivers formed from snowmelt or the occasional rainfall-induced flash flood. May 7th seemed like the perfect spring day to experience what Zion had to offer.

Upon arrival to Zion the day before the run it was apparent that spring had already come and gone. The temperature was easily in the high 80’s to low 90’s and not a cloud in the sky. Rapid snowmelt and the subsequent ice-cold water flow had closed access to the Narrows. My thought/hope was that the springs along my route may be flowing freely as well. Same or hotter weather was forecast for the following day as well.

The morning’s air at 5:30 am and 7000 feet in elevation had a nice crispness that I hoped would last at least through the first 13-mile leg until I met up with Lori (girlfriend/partner) at the trailhead to Angels Landing. Oddly enough, when I arrived at the East Entrance/East Rim Trail there were five others leaving in a pack to do the very same run. We exchanged pleasantries and they took off into the darkness. I followed alone a short time later. The trail is a well-traveled one, but still offers plenty of opportunities to take a wrong turn as there are very, very few trail markers. I caught the group after about an hour, and we hop-scotched for the next 30 minutes or so until I stopped to admire the view and take some pictures. That was the last I saw of them.

To say the trail was rolling would be an understatement. The cool air and shade lasted for the first two hours, and only the shade would return as day turned into night, but that was still 12 hours down the trail. I arrived shortly before Lori at the first of two scheduled rendezvous points with her. This allowed me to take a connector trail out to Angels Landing. It is a pinnacle of rock that juts out over the valley a couple of thousand feet below. The trail to get to that point is easily the most terrifying one I have ever been on, and I am not easily rattled. I am amazed that the park service lets people go there. I spotted Lori on my way back off the point as she was just arriving. Perfect timing.

She brought cold drinks, food, snacks and a wonderful attitude, all of which I consumed in excess. Good thing I did because I would not have the opportunity for any more of that for the next 26 miles. The trail quickly steepened as it wound up through patches of melting snow and flash flood debris. I was soon out of sight, literally from any signs of civilization or other people.

My first water stop involved going down a steep short trail where I found a four inch deep paint-can-lid-sized hole in the ground, filled with green moss and water. With trepidation, I refilled my water bottle and dropped a purification tablet into the brackish water, dreading the thought of having to drink the warm slurry in an hour or so. Open space, blazing hot sun, sharp, rocky, rolling trails were the norm for the next several hours, with one glaring exception.

After a sharp drop in terrain; the trail disappeared into a valley of floating grass in one to three inches of water over a thick layer of mud that stuck to my shoes like gum from a sun baked parking lot. I tried to hop along the scattering of downed trees but soon found the greenery around them was actually razor sharp sticker bushes which soon produced the first significant blood flow of the day. Despite the abundance of clean (looking) flowing water, it’s not recommended you use it as this area is heavily grazed by cattle and horses. “Water, water everywhere and not a drop to drink” echoed in my mind.

More and more hot, dry rolling terrain followed until I came to an area called Lava Point, aptly named because that was indicative of the air temperature. I had long since gone through both hand-held water bottles and was well into my hydration pack supply. The map, however, said that there was a spring a couple of miles down the trail.

What I found was a fair-sized flowing torrent of snowmelt the color and consistency of caulk. Never one to pass up water, I filled both bottles and was off again, dreading the thought of chewing this brew later. Thankfully, I encountered a real spring a mile later whereupon I emptied and refilled with clear, cold ice melt. Apparently the mountain lions liked the water in this area as well due to several piles of scat I noted. This was clearly not a place to linger, look weak, sickly or tired.

Several hours later I was finally approaching my second and last scheduled rendezvous with Lori before the final 13 mile push to the finish. I was in every way empty-food, water, energy and motivation. She, and the supplies she had really were an oasis in the desert. Ice-cold beverages, fruit and real food never tasted so good, and the shade of the car interior was a genuine life saver. After a heavenly 40 minute stop, I was back on the trail. I had four hours to go the last 13 miles before it got dark. No worries I thought.

The trail, however, proved me wrong. For the next hour it was thick heavy sand that swallowed my shoes to the top of my laces. The next hour it disappeared entirely in the river valley which required a water/sand bar/mud flat crossing every 100 meters or so. It was here that a lone hungry looking coyote the size of a pony appeared from nowhere, crossed the river just ahead of me and disappeared into the scrub. At long last I found a marker indicating that the trail was finally heading back up and out of the canyon, or so I thought. I did go vertical for some time, which was shortly followed by an equally daunting downhill ending at a raging, and I mean raging, torrent of silt-laden snowmelt. On the opposite bank of the 20 foot wide river stood the trail marker. Terror seized me.

Here I was six or so miles from the finish, or anything/anybody else for that matter, every emergency device I had for rescue was electric, and I had to ford an icy-cold rapid, seemingly waist deep. As I wandered up and down the near bank looking for rocks/trees/anything to cross on to avoid the water; my terror continued. Not finding a natural bridge to cross I strode into the rapids and was quickly engulfed by ice-cold water. It felt good on my tired legs but they quickly became numb and stiff. Water surged against my hips trying to push me downstream as I waded to the opposite bank. Thankfully I did not fall and successfully made it across. The adrenalin released from this fight/flight experience put some decent pep in my step for the next couple of miles; unfortunately there were still four more after that.

The last several miles are almost all uphill, to varying degrees. Literally. I was by now at shuffle pace with my heart racing from exhaustion. The sun had set and darkness and desert coolness was closing in around me like a wet blanket. The last mile seemed endless and within a quarter of a mile of the trail terminus I sucked the last of my water from my hydration pack. Shortly thereafter I saw Lori on the trail waving me in. There has never been a finer sight.

14 ½ hours after starting at the opposite side of the park 52 miles distant, I touched the trail head sign and mentally marked the Zion Traverse off my bucket list.